Have you ever gone out, camera in hand, with a preconceived idea of what you wanted to photograph?  I know I have.  Several times I went looking for what I thought was there only to be disappointed that I could not find it.  It happens all the time to all of us, like it or not.  Probably the worst case happens when we travel to some location that has been photographed many times.  we have seen the results in magazines and online so we know what to expect.  Or do we?  On our trips to East Africa's Tanzania we often have to remind people to photograph something other than the wildlife.  But when we look at the photographs in magazines from East Africa, we see animals, wildlife, so we are tuned to that expectation. 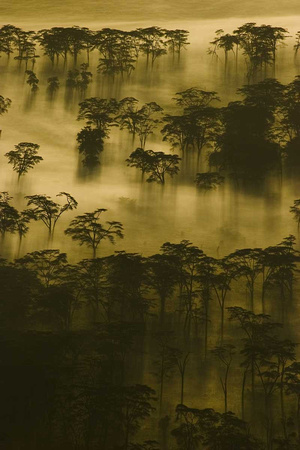 On one of those trips, we were rolling out of our lodge on the rim of Ngorongoro Crater before sunrise in order to be on the crater floor as early as possible.  Walking to the vehicles I looked down into the crater and some 2000 feet below me and maybe a couple of miles away was this spectacular ground fog hugging the base of the trees in the Lerai Forest.  I grabbed my 100-400 lens and set about bracing the camera on the railing of the walkway.  Shooting away, I had almost every person in our group stop to look over my shoulder.  To a person they all asked,

Every single person shrugged and walked on.  Africa = Animals was the mindset.  No animals, no photograph.  Later, at lunch in the crater I was looking at my images on the LCD of the camera and came to this one.  The person sitting next to me asked, "Wow!  Where was that?"  I said, "That's what I was shooting from the rail this morning."  Reply was , "Why didn't you tell me?"  Which I had but they were looking but not seeing.  Now on EVERY trip we urge people to photograph the landscapes as well as the wildlife.  We also tell people to put down the cameras now and then, gaze at what's before them, breath in the air, listen to the sounds.  When you get back home and start going thru your photos the sounds and feelings of East Africa will be alive in your brain.  Drop those preconceived ideas.  Be open to the experiences at hand.