I keep hearing that shooting a lot of photos will improve your abilities.  I am not sure I buy that as a way to improve.  Maybe if you wrote down all the settings or at least reviewed them when looking at your images, maybe, but who is going to do that?  Not many people, that's for sure.  With film you could not afford to just go out and "shoot a bunch" of photos.  You had to learn another way, the right way.  Go way back to hand held meters that I started with and see what decisions you are faced with just to take your first exposure. 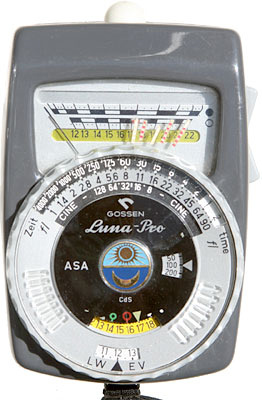 A hand held meter shows many choices.  It is up to the photographer to figure out which combination works the best for the situation you are facing.   The meter here is offering several choices, f/2.8 @ 1/500 or maybe f/8 @ 1/60 or even f/16 @ 1/15.  All of those choices deliver the same amount of light to your sensor.  Which one is the correct setting?  They all are but they are ALL dependent on the subject, too!  To me, learning to shoot using a hand held meter was the real key to understanding photography but it still didn't improve my images.  I still lumbered along with good exposures and the death of field I wanted but the images were still lacking.

My mom thought my photos were great but as anyone understands, your own mom always thinks what you do is great.  I kept shooting away thinking that the difference between my photos and those I was seeing in the magazines was some secret filter or special film, some trick that those of us on the outside would never understand.  After almost 5 years of shooting and doing self evaluations I was convinced that no amount of anything was going to improve my photos.  Then I met Boyd Norton.  I had read a book of his, Wilderness Photography, and set a goal of meeting him.  By chance I moved to a new job in a new state and into a new office.  Across the hall in the Research Library was a lady named Barbara Norton who's husband was rumored to be a photographer.  I introduced myself and set the machinery in motion.  Boyd and Barb came to my house, he looked at my images, commented that they were good but just needed some polishing then suggested I attend one of his workshops.  I did just that about 9 months later.  I was amazed at what changes took place.  I started looking at things differently.  All of a sudden the world was a different place to me.  I understood the differences in how we perceive what is in front of us versus how the camera freezes it into submission.  If there was a "lightbulb" day, it was the second day of the workshop.  The choice of lenses AND position made such a huge difference in how perspective was rendered.  Understanding near-far relationships became obvious, something I had not considered as a control point in my images.

At some point I went home, the week was over, and I was upset.  Upset that I had spent almost 7 years shooting snapshots and not doing photography (there is a difference).  I wanted to go back to some of those places and reshoot with my new vision.  That will probably never happen and even if I did go back, the scene, mood and lighting would be different.  I vowed to move forward, concentrating on using what I had learned at the workshop, to open my eyes AND my brain when setting up a photograph.  I read as much as I could about composition.  I tore pages out of magazines of images that I really loved and spent hours looking at them and analyzing where the light was coming from, what lens was used, the position of the elements in the images; all of those things that attracted me to the photograph in the first place.  Some 35 years later, I still have a file folder with those images, the ones that I poured over to see how the photographer worked to turn them into magic.  I suppose I will throw them out or my kids will someday but they represent part of my learning curve.

When I see someone suggest that to improve your photos just go out and shoot a lot more, I cringe.  If shear volume were the only magic, then all semi-serious digital photographers would be superb.  Just like in golf, "Practice doesn't make perfect; only perfect practice makes PERFECT!"

Mickey Tipton(non-registered)
Great article - even greater advice!!!
Scott McKay(non-registered)
Very true and not heard enough. Being self I watched every video on techniques and equipment. I started out under the teaching shoot, shoot, shoot. But saw no real improvement. So I started asking questions on how they got that fantastic capture. Improve your skill behind the camera to improve what happens in front of the camera. I'm still learning everyday.
Pansy(non-registered)
Oh Jim,,,the memories of my struggles....though I have yet to make the breakthough you did.....but I still get the giggles when I think about watching the movie "Mr. Holland's Opus" in theater and trying to understand the lighting used.....I was even taking notes I think.
No comments posted.
Loading...
Subscribe
RSS
Recent Posts
Down to the Bare Essentials Heroes and Leaders Unfocus Your Photography Lenses and Perspective Control My Field Workflow Going Light - Micro Four-Thirds in Africa Visiting East Africa What Was That? Just a Book? Micro 4/3rd's, Second Trip Completed - Scotland
Keywords
photography Tanzania Africa camera wildlife antique lenses safari Colorado tintype
Archive
January February March April May June July August September October November December
© Jim & Cindy Griggs
Powered by ZENFOLIO User Agreement
Cancel
Continue