The church I grew up in had a "mentor program".  If there was some adult in the church who worked in a field you were interested in, then that person would become a mentor for you thru High School.  My mentor was Bill Brooks, a degreed Engineer who worked in metallurgy.  He offered me assistance with geometry, algebra, physics and other tech areas my senior year at South Houston High School.  He knew I loved racing and invited me to go with him to the Society of Automotive Engineers (SAE) Banquet in Houston in January 1965.  The guest speaker was going to be AJ Foyt, not my favorite but a driver with a great record of wins in a lot of vehicles.

The evening of the banquet, Mr. Brooks picked me up and we headed to downtown Houston.  He asked me if I liked AJ Foyt.  I said, "He will not be here.  He broke his back in a stock car crash at Riverside over the weekend."  Mr. Brooks was worried that no one would be there of interest.  We walked in and got seated at our table.  Up front on a platform was a long table with all the SAE leaders in the area and in the middle sat Johnny Rutherford!  I was elated.  Johnny drove more sports cars than AJ and was a real hero of mine.  I told Mr. Brooks, "That's Johnny Rutherford."  He asked if that was a good stand in.  I said, "Definitely!"  Things got rolling with the usual Pledge of Allegiance and an opening prayer and then they introduced Johnny Rutherford, explaining about AJ Foyt's mishap in California.  We watched a movie about racing at the Brickyard that lasted about 15 minutes, then Johnny told a few stories about his racing career.  Shortly after that the floor was opened for questions.

I was almost embarrassed by the questions I heard.

Q)  "What is the fastest you have ever driven?"  A)  "Speed is a relative thing.  I have driven upside down and backwards faster than anyone in this room."  Bunch of laughter followed that one.

The questions kept rolling in, none technical, none that I would have expected from Automotive Engineers.  Finally the questions died down and I wanted to ask a question.

I asked Mr. Brooks if I could ask a question and he said go ahead.  I raised my hand and Johnny looked at me and said, "Yes?"  My question was rather straightforward; "Do you see any advantage to the independent rear suspensions on the mid engine Lotus cars over the De Dion rear axles of the traditional front engine roadsters at Indy?"  He looked at me and said, "Yes.  They keep a larger contact patch thru the corners.  That lets them carry a little more speed onto the straights."

No other questions so I raised my hand again.  "Do you see any difference in the current F-1 drivers style at the oval track versus the traditional Roadster drivers who are used to driving on ovals?"

"Well, I decided to follow Jim Clark in his Lotus to see what line he was taking in the corners.  After two laps, he was too far ahead for me to follow."  People laughed.  Again, no more questions.

I raised my hand.  "The higher revving, short stroke DOHC Ford V8's seem to turn out more horsepower than the long stroke Offenhauser four cylinder power plants in the front engine roadsters.   What are the advantages of the V8 versus the 4?"

"Great question", he said.  "The higher the RPM the more horsepower you can generate.  The Offy's have a bunch of torque, great for exiting the pits but for shear speed down the straights you need horsepower.  What isn't known is the reliability of those engines"

I remember asking several more questions, all technical in nature, to which Johnny gave brilliant answers. The Q&A session was closed and the banquet adjourned.  We were getting up to leave and Mr. Brooks looked around and saw Johnny pushing his way thru to our table.  Johnny got to me and stuck out his hand and said, "Johnny Rutherford.  What's your name?"  I shook his hand and answered, almost in shock.  Then he said something to me that I will never forget. "I wanted to meet you.  I figure that one of these days I will either be driving against you or driving your cars!"  He laughed and asked for my address which I printed out on a piece of paper for him.  We shook again and left.  I was a High School Senior and I was elated to meet and talk to Johnny Rutherford in person.

During the month of May, Johnny sent me a daily subscription to the Indianapolis newspaper so I could follow all that was going on.  He also sent me an 11 X 14 photo of his car and the team parked at the start/finish line with the bricks and a cool letter.  Sadly, all that stuff is gone.  Probably tossed when my parents moved back to Oklahoma after retirement.

That was not to be my final contact with Mr. Rutherford.  During my senior year at Texas Tech, the Ford Cavalcade of Speed came to Lubbock at the Ford dealer downtown.  I went there to see the Ford GT-40 on display.  This was the car from LeMans with the bubble on the roof to allow Dan Gurney to fit inside.  There were also several Ford powered dragsters and a couple of stack cars back when stock cars were built from real cars.  Johnny Rutherford was scheduled to be there on Sunday afternoon talking to visitors.  I scheduled myself back there on Sunday and got in line to shake hands again with one of my heroes.  When I got up to him I said, "I met you in Houston four years ago at a banquet.  I asked a load of questions and you came and shook my hand."  He remembered and asked what I was doing here.  I told him I was getting a degree in Mechanical Engineering.  He asked me to hang around so I stood aside then as people left he took me on a tour of the GT-40.  I sat in it, sort of.  Not a great fit but it did have the Gurney bubble on the roof so I could have closed the door.  The interior was nothing short of cramped.  It was really cool to have him remember me and to get me inside my dream car even though it was another car I could not fit very well. 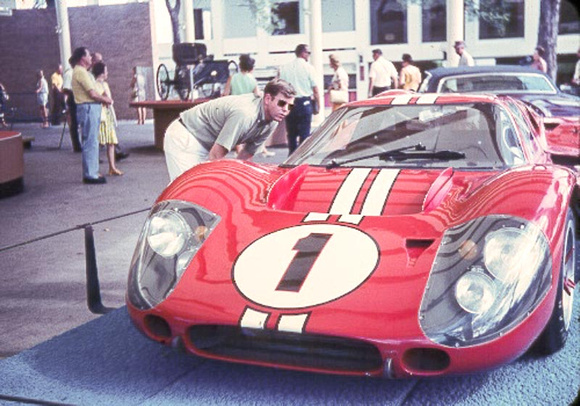 In 1986, I was living in Indiana and went to Carburetor Day with a pass into Gasoline Alley.  I met Johnny there and had him sign my hat.  I mentioned the Houston thing but he was in his driving suit and headed to the track so he only said, "Sure, I remember."  That was asking a lot!