I started drawing and painting when I was three according to my mom.  I always liked art; no, I loved art.  My first watercolor painting was of a forest scene with birds, a rabbit, a skunk and who knows what else.  I was three years old.   I always wanted realism in the stuff I drew.  None of it every made me proud.  My mom kept a load of my paintings and drawings and even a few of my notebooks from high school with very few if any notes in them, just sketches.  I took art classes until I decided to go into Engineering.  That was about the 8th grade.  Living near the planned NASA Manned Spacecraft Center just outside of Houston influenced the techie side of me.

I made a few oil paintings but only one I really liked, of a pheasant in the snow, I gave it away to a girl I liked.  After graduation from High School, I bought my first 35mm camera.  It was a non-coupled rangefinder 35mm made in Germany.  Felt very precise and did amazingly well for the weird shortcomings it had.  I gave exactly $7 for it.  Bought it from a guy in the Navy at the Houston Bus Depot who needed some cash.  It was a Regula, 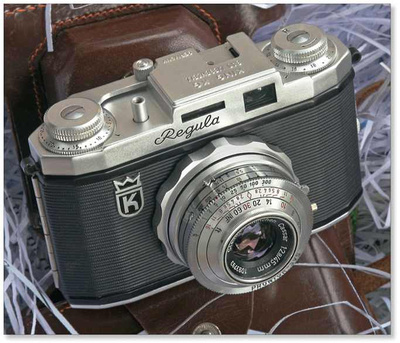 built by King with an extinction meter, something I had no idea how to use or even what it did until sometime in college.  I shot a load of Kodachrome thru that thing using a small handheld meter I bought for $12 at a discount store.  Starting with that simple meter really helped me understand the choices there are to make in photography plus having a non-coupled rangefinder did slow things down a lot, almost like using a View Camera.

While I was in college the school newspaper was looking for a darkroom technician so I applied.  I had been in several dark rooms but not really in a darkroom but they trained me; taught me how to load and develop film then make prints.  That was cool and really sold me the farm when it came to photography.  A couple of hours with my hands in the "soup" and I was hooked.  Developing other people's film taught me the value of a great exposure, in the camera.  I still only had the little King but I was now shooting B&W with it.  Fun to process and print your own stuff plus I had access to the darkroom and it was essentially free!  I did get to use a Nikon F sometimes that belonged to the school.  I loved that thing except for loading film.  The back and bottom of the camera were one piece and had to be removed to load a roll of film.  What a pain that thing was to use in the field.  If it was raining or the wind was howling (West Texas, remember?) then you could count on having issues.  I promised myself I would not own a Nikon F when I could afford my own cameras.

After graduation, I went and priced cameras and delayed any purchase!  I was newly married and my wife had two more years of college to complete on my dime and I had a school loan to pay off.  Big time income stream though!  Engineers were in demand in 1969 and I was making a whopping $10,000 a year.  Doesn't sound like much now but the average graduate in 1969 was being offered jobs in the $5,000 to $6,000 a year range.  I felt wealthy but I hate debt so we were on a cash only program credit cards not being a big deal back then.  After six months of income stream we had put enough aside to buy a Miranda Sensorex and a 50/1.8 lens or we could wait a  couple more months and buy a better SLR.  The Miranda was rated fairly high in the magazines so rather than wait, I parted with what we had saved and took home the Miranda.  During that first six months of ownership it was in the shop twice.  The third time I got rid of it.  It was one of the worst cameras I had ever been around.  I had a friend headed to Vietnam for 6 weeks so I asked him to buy me a camera.  I gave him a budget of $200 which would land you a good Pentax or Canon SLR back then.  Instead he came home with a lens, a 28mm f/3.5 wide angle lens.  It was a Canon but rather useless without a body to put it on.  I think it cost me $35.

I went to the local camera store and handed the guy my lens and said "I need a camera to fit this."  He must have thought I was nuts.  Off the shelf came a brand new Canon FT-QL SLR body.  It was $150, about what I had paid for the Miranda with a lens.  The store owner told me he would stand behind it for 18 months.  SOLD.  My funds were depleted but I had a good quality SLR and a great wide angle lens.  I shot with that combo for many months before I could buy another lens.  Next I found a great used 200mm f/3.5 telephoto. and again, blew my funds.  Now I had a wide angle and a telephoto to use.  I put them thru the wringer.  Loved the perspective choices I had!  About then Canon announced their new professional model, the F-1.  Sounded cool, much like the race series I liked so how could I go wrong?  I was working at Texas Instruments in Dallas where several people in our group were making trips to Tokyo almost monthly.  One guy I knew well did me a huge favor and brought back a Canon F-1 with a  50mm f/1.4 lens that he bought for me in Tokyo for $225. They were selling here in the USA for almost $300.  That thing was rock solid, felt like the old Nikon F that I used in college but had a regular back on it.  I still own that original F-1 and the 28mm lens.  Both still work, by the way.

Cindy and I both took a photography class from Bob Smith in Dallas.  Bob was a magazine and assignment editorial photographer and a great teacher.  I really got to understand the demands of shooting what an editor wanted during that semester.  We also joined the Sierra Club and started going on outings to West Texas, mainly Big Bend National Park.  Backpacking in the desert wilderness of that park opened my eyes to conservation and shooting nature photos.  I carried my F-1 on every trip as well as all three of my lenses!  After every trip there was a slide show gathering of the Dallas Sierra Club group to relive the trip thru images.  Mine always seemed to be the best exposed thanks to my training in college with the newspaper and to the extremely tight tolerance on the shutter speeds of that F-1.  I checked the speeds on a device at the camera store religiously and my F-1 was always, always as close to perfection as any camera they had seen.  The F-1 had one meter system, a spot meter.  I grew to love having a spot meter.  This allowed me to get precise metering on a subject then recompose and shoot.  Years later when I switched to the EOS line of Canon SLR's I was lost.  I didn't trust anything that said the meter was "intelligent" such as Minolta claimed on their cameras and Canon's new line of cameras had several meter modes but none of them were spots!  I had to learn a new meter pattern before I trusted it.  A light meter is dumb as a load of rocks.  You had better know what it is telling you or you are setting yourself up for failure.

I great thing happened in 1973!  I moved to Denison, Texas and eventually met Allen Crenshaw.  Allen owned a photo studio in Denison and was without a doubt the best portrait photographer I had ever met.  He was also capable of making astounding photos in nature.  His compositional skills were what really set his images apart from everything else I had seen.  I started working with Allen, at first doing a catalog shoot for a peanut distribution company.  I distinctly remember; well sort of remember; OK, it is a bit fuzzy but you will understand once I explain.  We were going to shoot some ad pages for their catalog with peanuts in various still life layouts.  Included in each shot would be a mug, glass or stein of beer with a good head on it.  We collected all the beer steins and glasses, etc. we could find; put those in the freezer and put a bunch of beer in the refrigerator at the studio.  We did the first set up, grabbed an icy stein and poured a beer in to get just the right head, started shooting and within a couple of minutes the head was essentially gone.  The only thing to do was to pour another beer; but what to do with the one we had just shot?  Simple, we took turns drinking them as they lost their head.  I know the shooting session last 3 maybe 12 hours; honestly I don't remember but I do know my wife had to come pick me up.  Allen lived close to the studio so he was able to crawl home easily.

I wound up doing weddings for Allen as well as a few portraits and some commercial stuff.  Allen was working on an Masters of Fine Arts in photography at Austin College nearby and decided to recreate as many of the historic photographic process as was possible starting with a Daguerrotype.  He asked me to help him with the chemistry side of things as well as the process procedures.  We spent many hours making our first Daguerrotype plate and sensitizing it.  A cooper sheet was polished to a high sheen then electroplated with silver and again polished to a mirror finish.  Next, to sensitize it we had to go into a dark room and expose the plate to the fumes of Bromine, then Iodine and then back to Bromine.  All were heated by a small candle to get the fumes really rolling and ALL those chemicals were marked as poisonous and to avoid breathing their fumes.  Oh, GEEZE!  We were locked up in a darkroom with these wicked things sitting over a candle in a small beaker.  We figured, anything for ART!  Damn the torpedoes; full speed ahead.  We exposed the plate then came the development process.  Suspend the plate over a beaker of Mercury that is heated and let the fumes of the Mercury develop the image, then run the plate thru stop bath and fixer to stabilize the image.  Mercury?  That stuff is known to cause brain defects and issues.  We both sort of figured we were half nuts to be doing this in the first place so we might as well complete the process and be totally nuts when the semester was over.

For more on the craziness of the old process and to learn about the Great Tintype Conglomerate, read my early blogs concerning that topic.