I think everyone who goes to East Africa on a Photo Safari remembers their first lion in the wild.  I certainly do!  It is burned deep into my memory banks and exists as a series of slides exposed in the early dawn light.

We had flown for what seems like several days to get to Arusha, spent the night and then boarded a small aircraft to make the 90 minute flight to Seronera Airstrip in Central Serengeti.  Tanzania is a wild landscape viewed from above for the first time but the features were largely unrecognizable, this being our first trip.  We were met at the airstrip, loaded up into our vehicles and headed out on a game drive while our luggage was delivered to camp at a place called Naabi Hill.  We saw a variety of wildlife right at the "terminal"; zebra, gazelles, an odd little rat-like thing called a hyrax and a pile of pygmy mongoose rolling and tumbling along an abandoned termite mound.  In less than 30 minutes we were in close proximity to a number of elephants, several hippos and giraffes.  We got to camp in the late afternoon where the ground rules were explained. 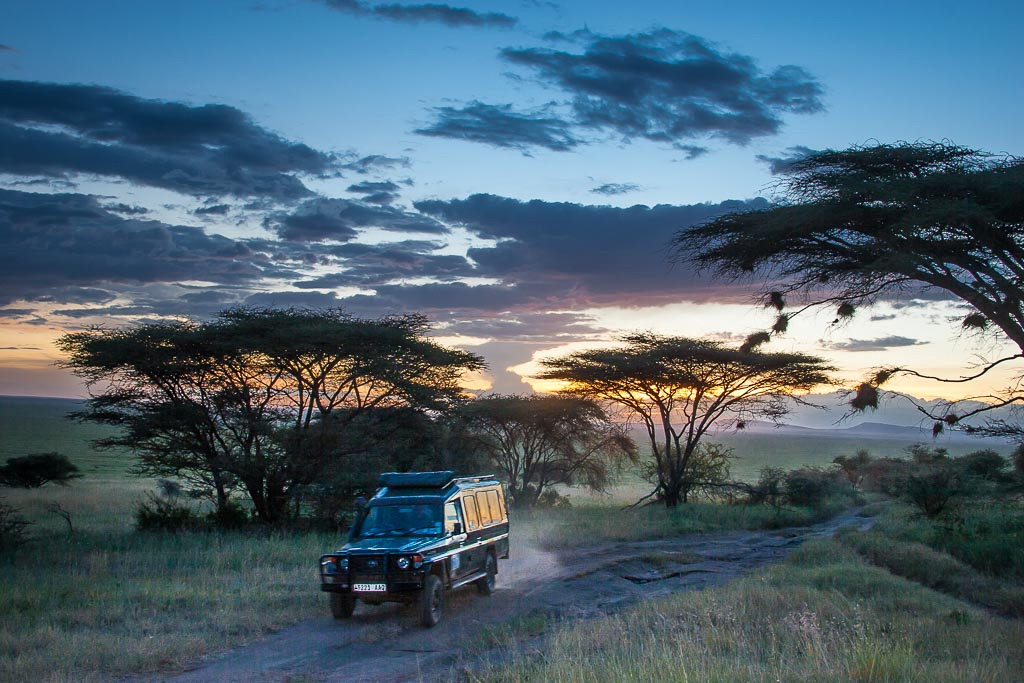 The camp at Naabi Hill was down on the flats but backed up to the hillside.  The hillside was shrouded in acacia trees that escaped down the hill and filled in some voids in and around the tents.  The rules were simple:  "After dinner and our time around the campfire, we would be escorted to our tents by one of the camp staff. Do not come out of your tent at night without calling for a staff person to meet you in front of the tent.  We would be awakened the next morning for breakfast and escorted to the dining tent.  This is Africa, after all and the wildlife has the right-of-way." 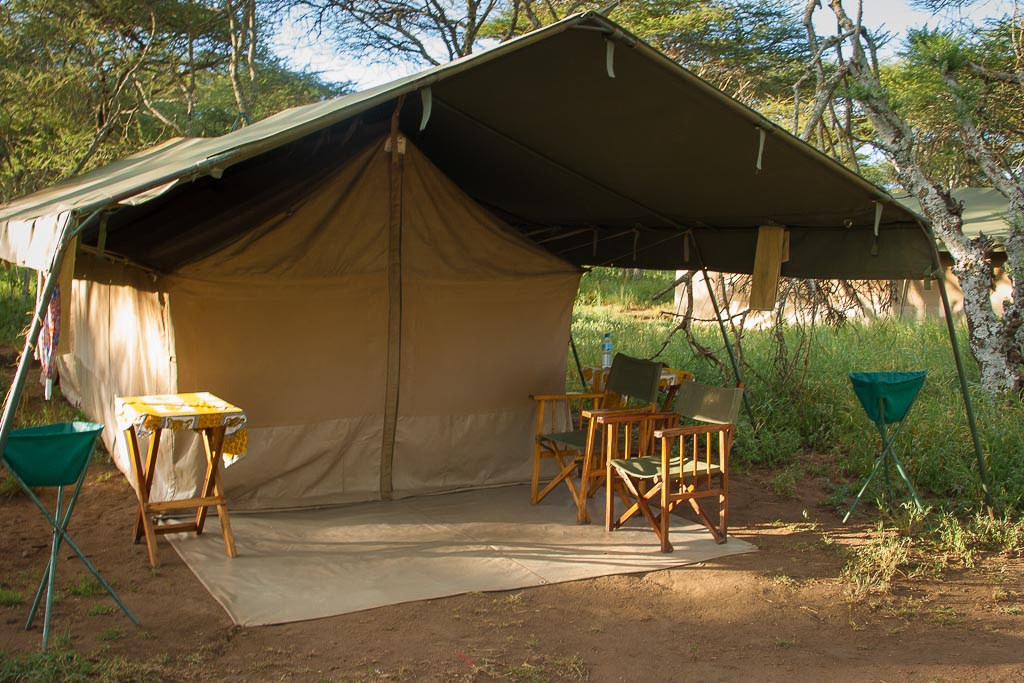 I was good with the rules.  Seemed simple enough but so far I had not seen anything that looked like it could harm a person.  Promptly at 5:30 AM we were awakened as planned and headed to breakfast.  Afterwards we loaded up our camera gear and headed out from the camp just as the sun was coming up.  The sun was just glinting thru the trees as we pulled away. 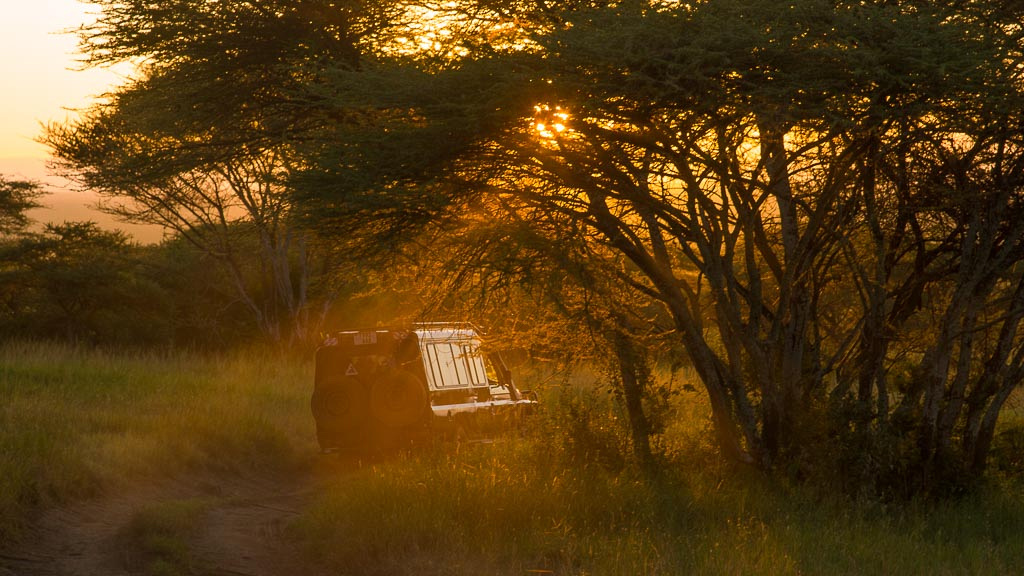 After driving for at least 200 yards our driver stopped and asked if we wanted photos of a lion.  I jumped up and asked, "Where?"  The driver pointed back to the left side of the Rover and there he was, a magnificent male nestled back into the foliage with perfect light.  My first LION! 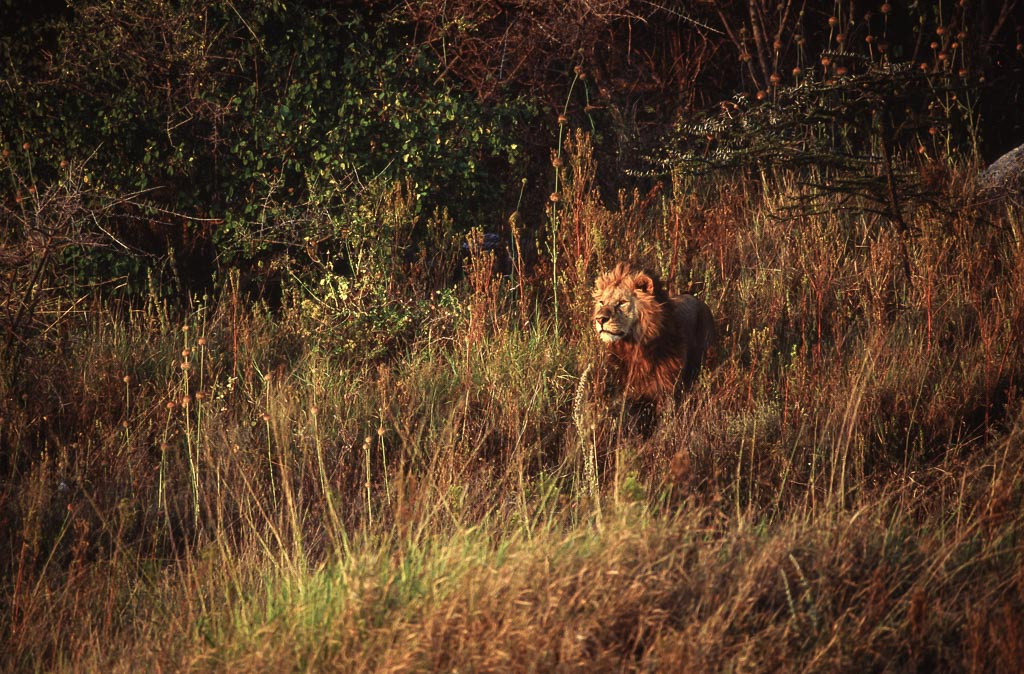 Do I remember that morning?  Absolutely!  I had figured that lions and other predators would not come near Naabi Hill with all the human activity going on with our camp and the HQ buildings located on top.  I figured WRONG!  Glad I wasn't interested in a morning walk.