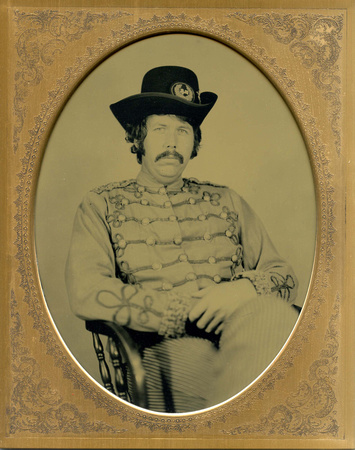 Tintype of me!Taken with an Anthony 1870 Tintype Camera and 2000 watts of daylight bulbs about 4 feet from the subject. Exposure time was 8 seconds. Also notice that the buttoned shirt is reversed as is the insignia on the hat. This was a problem until high quality mirrors started being placed in front of the lens.

I spent a year helping a friend who was working on a Masters of Fine Art in Photography.  We did some really crazy stuff, like recreating old photographic processes including tintypes and wet plates.  Part of our research included tons of reading about the history of photography.  One very fascinating topic for me was the period of transition from photography being almost an alchemists realm to ordinary middle class Americans picking up cameras and taking snapshots on their own.  Up until about 1900, photography was a very specialized field, requiring a good understanding of chemistry, processes, the equipment, exposure and the art required to turn out good images.  Knowledge of all those fields was required to master the simple act of recording images.  About 1900 photography got "dumbed down" by George Eastman to the point that almost anyone could buy a camera, take it on a trip and get OK snapshots of the places they had been.  That time marked the transition from travelers keeping diaries every evening with descriptions of their trips to snapshots doing that job for them.  Writing in your diary was one of the last thing people did in the evening before turning down the wick.  Photography was growing rapidly back then as people gave up their books and pens in favor of snapshots.  How many people came home and put together scrapbooks with images from their trips plus written descriptions in the margins? Almost all of them!  The daily diary was going the way of the horse and buggy!

Similarly, we have seen another revolution in photography recently.  Digital photography has taken some of the mystery out of the process of capturing images.  Not that many years ago, probably less than 15, film photography was just being invaded by digitals early adopters.  I was slow to embrace the new technology only because the results were less than spectacular with lots of noise and clumsy to use cameras.  Once I made the transition, I became a man on a mission.  I really liked the total control that digital gave me.  I mostly shot slide film prior to digital but if I wanted prints, I had to send off the slides to get them done.  I lost a prize winning slide once due to the mail.  Besides the constant threat of lost images, there was the size of the prints being made.  We had few choices and in most case NO choices in cropping.  With digital, I can crop it to whatever looks the best to me.  I also have control of the color images the same way I had control over black & white in the darkroom EXCEPT the controls are repeatable, simple and I didn't come out smelling as bad!

Now digital photography has taken over in both a good way and a bad way.  The good?  More people are enjoying the hobby and turning out some exceptional images plus cameras are in more places at more times allowing capture of very unusual events.  The bad?  There are more people carrying cameras and business cards, claiming to be "professional" photographers.  That is not a really bad thing but it has driven down the value placed on photography to the point that the true, old time professional photographs are practically out of the stock business and struggling to make ends meet.

What is the next step?  I see the industry being split into two factions; cell phone cameras and DSLR's.  I doubt there will be many P&S cameras in 10 years as phone cameras increase in ability by leaps and bounds.  The working "professionals" and extreme hobbyists will still opt for the versatility of the DSLR and demand the quality of images these devices can produce.  Me?  I will be carrying DSLR's as long as I can still make it out and about but you know me and my love of video.  That is my true hot button!  I could be persuaded to stop shooting still images if I had a top of the line video camera and a team to shoot with including a sound man, gaffers, camera focus operator, boom mic operator, catering people…   …ooops!  Now I remember why I shoot mostly still images.