Sometimes I hear voices telling me to do something.  Yeah, I know you think I am crazy and this blog will stop any hope I might have had of getting a concealed carry permit but here goes.  Usually when I was on the road with my job, I carried camera gear in the trunk of the vehicle.  This was of course on purpose.  If there was a magnificent sunrise on the way to a sales call, then I might be a little late.  So what!  That sunrise was not going to happen again nor would it wait on me.  At end of a day calling on customers, I would usually drive around in some back country looking for photo ops.  Not one to sit in a bar and drink, (OK, a beer at night is a good thing but lets not over do it) I would also not sit and watch the US brain drainer (Television).  In fact, I have yet to turn on a motel room TV in almost a year and then only rarely to see a sports event or weather.  The camera was my afternoon/evenings entertainment.  One afternoon in Wisconsin, I had seen my last customer at 5pm and was ready to go out with the gear.  After almost two hours of shooting small lakes and reflections, I was headed back to a spot for sunset when I came upon a gravel road.  The voices began, quietly at first, but building to the point I knew I had to follow my instincts and drive that road.  Barely a half mile down the road I came across a large herd of doe whitetails.  Cool but not something my inner voices would push me to.  Up ahead I saw a bald eagle descending to a large tree!  Aha!  That was it!  I headed slowly down the road another quarter mile to the top of a rise.  I scanned the trees on both sides of the road.  No eagle.  Disappointed, I looked ahead and there on the right shoulder was a dead deer and perched on it a large bald eagle picking away at the carcass.  WOW!  Lucky me for listening to those voices.  I shut off the engine put the car in neutral and rolled ever so closely down the slight hill.  Stopped within about 50 feet of the eagle and pulled the keys out of the ignition.  I opened the door slowly, slipped out and shot over the hood of the car with my 100-400L IS lens.  The eagle didn't move.  I slid back into the car and rolled closer.  Repeated this several times until the bird had enough and hopped to one side and posed for me.  The sun was fading fast and I was running out of light but I shot until the eagle decided to leave.  Not sure where those voices come from but I usually don't question them!  They have rarely been wrong!!! 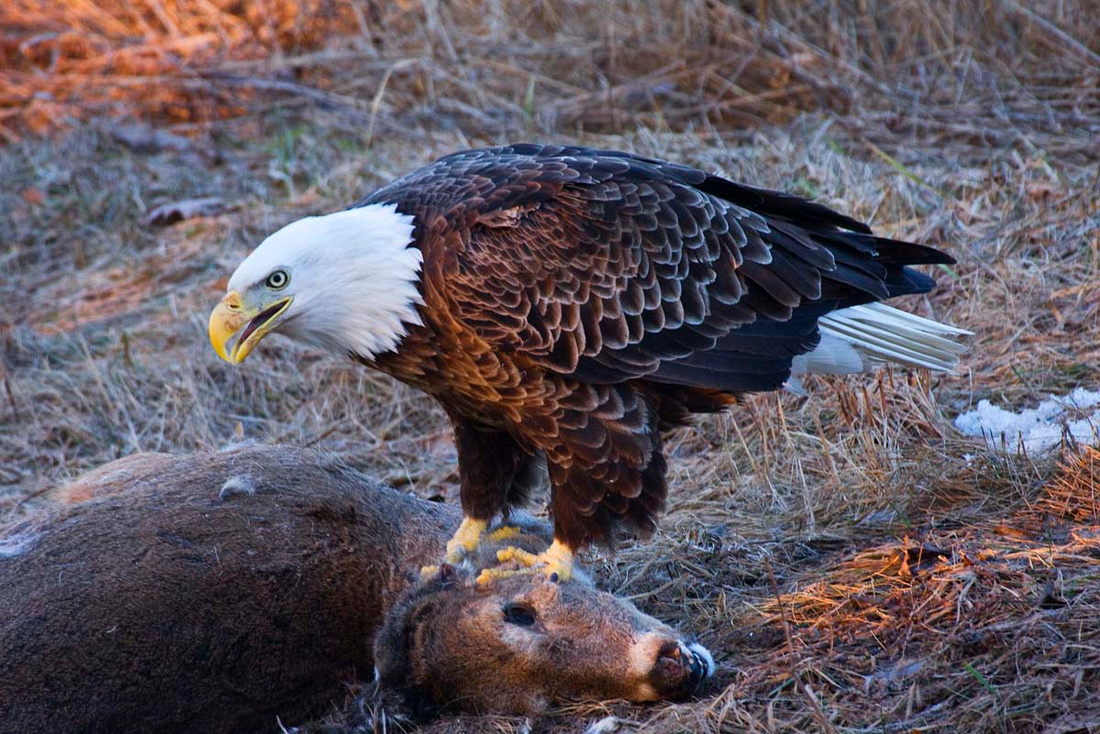 Chuck Moore(non-registered)
I too have heard those voices.
Michael Kreller(non-registered)
Wow - What a tremendous opportunity, great story, and beautiful picture. I do admire the stealth that you used in your approach to getting this picture of this magnificent bird. Some are lucky, but you seem to create your own luck.
No comments posted.
Loading...
Subscribe
RSS
Recent Posts
Down to the Bare Essentials Heroes and Leaders Unfocus Your Photography Lenses and Perspective Control My Field Workflow Going Light - Micro Four-Thirds in Africa Visiting East Africa What Was That? Just a Book? Micro 4/3rd's, Second Trip Completed - Scotland
Keywords
photography Tanzania Africa camera wildlife antique lenses safari Colorado tintype
Archive
January February March April May June July August September October November December
© Jim & Cindy Griggs
Powered by ZENFOLIO User Agreement
Cancel
Continue