The Druids Would be Proud

Visiting a customer in the little town of Alliance, Nebraska, I told the plant manager that I had heard of the town but this was my first time here.  He asked, "So, have you been to Carhenge?"

"About three miles north of town"

I finished up my meeting with him and headed north.  I will admit, you are not likely to just pass thru Alliance on your way to someplace else.  Alliance is not on the route to anyplace.  It is a destination you have to want to visit or like me, get sent there for some reason.  Carhenge has been on my radar for a long time but I suppose the remoteness and scarcity of reason to even be close has kept me away, until now.

Just out of town North on NE 87 (County Road 59) on the east side of the highway is a parking lot, a visitor center and the only attraction for miles, Carhenge.  Built by Jim Reinders as a tribute to his father who once farmed the land on which Carhenge is erected, the sculpture took shape from Jim's fascination with the original Stonehenge in England.  Built with 38 American vehicles arranged in a 96 foot diameter circle, there are also cars buried in pits up to five feet deep, trunk first depicting the similar "stones" in their positions at Stonehenge.  Proportionally the sculpture is accurate with cars replacing the stones, of course.  The whole sculpture is painted flat grey, another attempt to emulate stones rather than automobiles.  The artist completed work on the sculpture in 1987 and the site was dedicated on the Summer Solstice of that year, a fitting touch.

Was I fascinated with this place?  I have been there three times, first, just me on a business trip.  Again, a year later with my wife (she still wonders why I love this place) and again last summer with a great friend and crazy photographer, Jeff Heidel.  He was hooked as well and has vowed to make another pilgrimage soon.  Each time I have been there, it has offered something different in the way of light, weather, wind, flowers and mystery.  I think it would be a great place to photograph in the early morning light from a small airplane but I doubt that will happen by me.  My favorite images from there?  Taken at night using a small LED flashlight to help light up the "henge" during longer exposures.  Being so close to town, the ambient light makes capturing stars difficult but the ambiance from the town glow is fascinating.

If you plan to go, do not tell your friends, they will swear you have cracked up.  My friends know I am crazy so they don't even think twice when I say,"I am headed back to Carhenge.  Want to go along?" 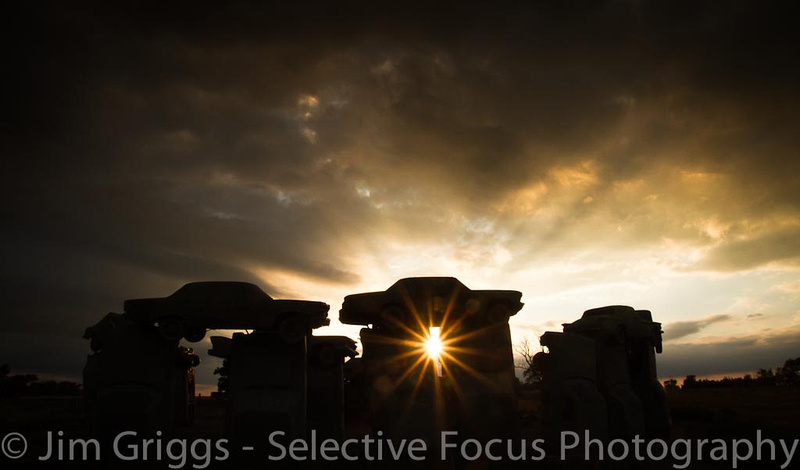