"The Stars at Night are Big and Bright" 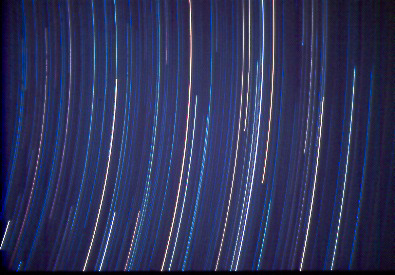 "Man, those stars are so bright", I thought to my self as I looked up from my sleeping bag in a remote part of Big Bend National Park in Texas.  Then I remembered!  "Oh CRAP!  My camera?!?!!"  Glancing at my watch, nearly 6 hours had passed since I had balanced the Canon F-1 and 50mm/1.4 lens on my boots and locked the shutter open.  I had intended to just make a one or two minute exposure but exhaustion from hiking 8 miles with a 40 pound pack took over and I drifted off asleep until NOW!  I reached up, covered the lens and closed the shutter.  The Canon F-1 was equipped with a shutter release lock to keep from accidently exposing a frame of film but if you put the camera shutter speed to "B", opened the shutter and rotated the lock, you could make a very long exposure which indeed I had!  Back home a week later and the Ektachrome 64 was back from the processor all mounted and ready for review.  There was my 6 hour plus exposure; a series of curved lines, all different colors.  That was great.  Being an extremist I made many more exposures using the "B" setting on the F-1, most on a tripod but not always.  The image on here is a terribly poor scan from an old HP slide scanner I owned at one time.  Sorry for the terrible quality but the image is lost somewhere in a file drawer and has not been re-scanned with modern equipment.

The star trails were something that we all shot back then, the stars in Big Bend was taken in 1970 on ISO slide film.  We didn't have much choice.  Long exposures were required with the film we had available ranging up to only ISO 400.  I tried a little of everything including driving down the road with the camera braced on the dash and the shutter locked open.  Did a few multiple flash images where I would lock open the shutter, manually set off a flash and have people move around to a new spot and flash again.  Lightning was always fun!  God provided the flash, all I had to do was sit somewhere with a metal tripod and my camera and cable release and make 60 to 90 second exposures, ISO 64 at f/5.6 and wait for lightning to strike in front of the camera. 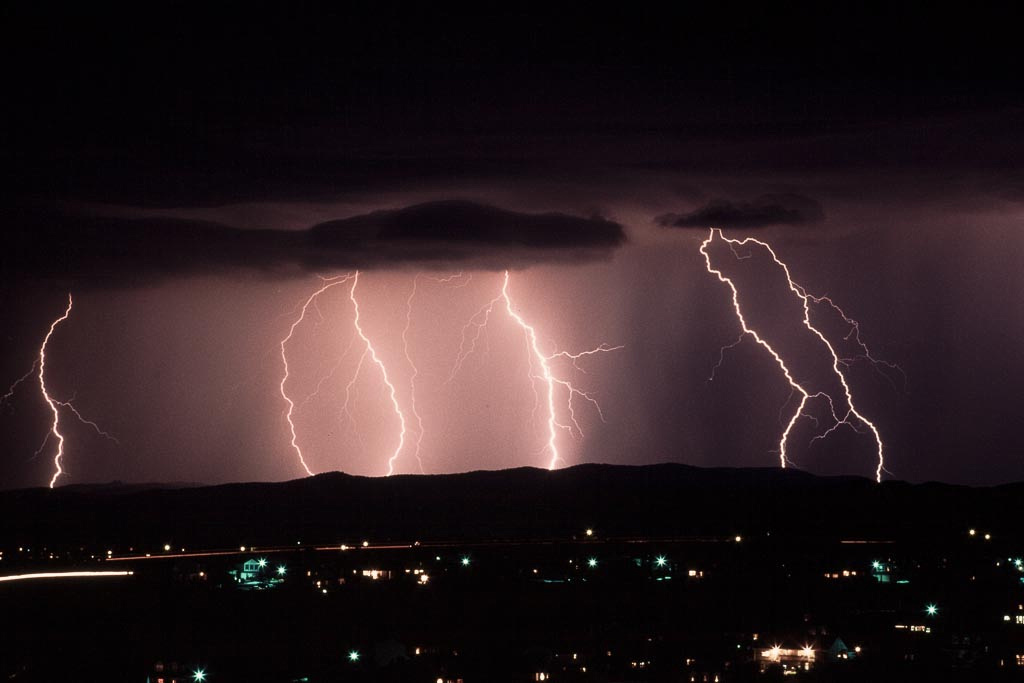 This image is from a ridge behind my house in Colorado back in 1979, about a 30 second exposure. 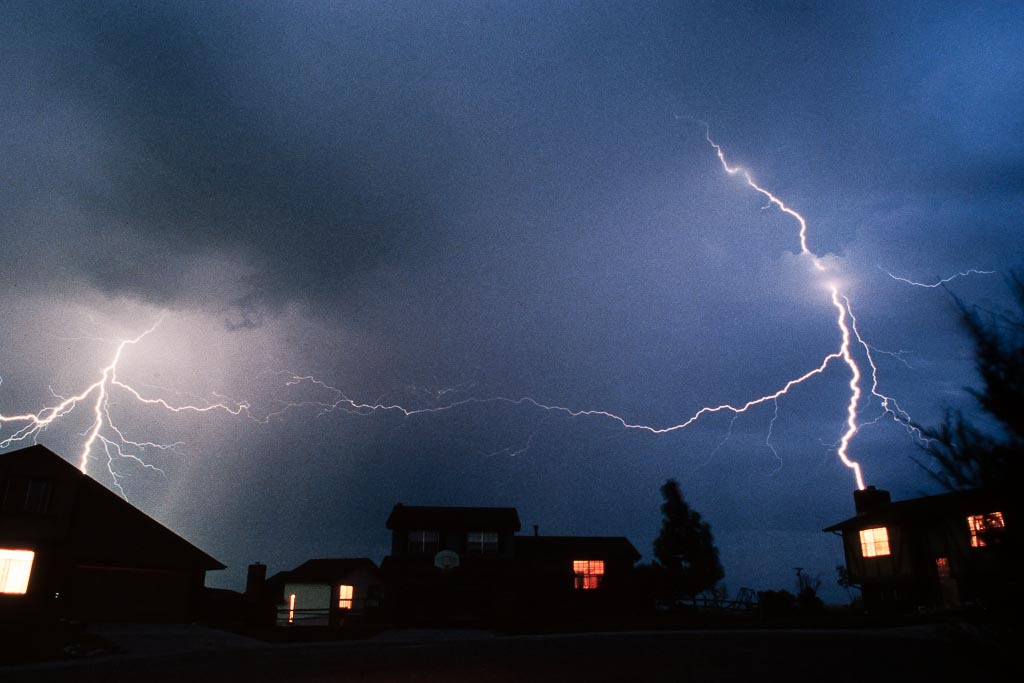 Taken from my front porch in Colorado as lightning was striking all around us, again in 1979.

With the advent of digital and high ISO (It is still ASA to me) capabilities, the game has changed.  Now everyone is trying to get shots of the Milky Way in different, unique locations.  I thought it was amazing when I got my first image of stars with my old Canon 10D and ISO 1600!  Jim Richardson and I were out in the Tallgrass Prairie Preserve learning about long night exposures with our digital gear.  He was shooting with a Canon 5D at the time.  I was out having fun and he was on assignment for National Geographic.  That was in 2006.  Jim was just down the trail from me shooting and looking at his screen.  I tried lighting him up with a small LED flashlight I owned.  I was amazed that not only could I capture Jim, both shooting and chimping but also the stars above him. 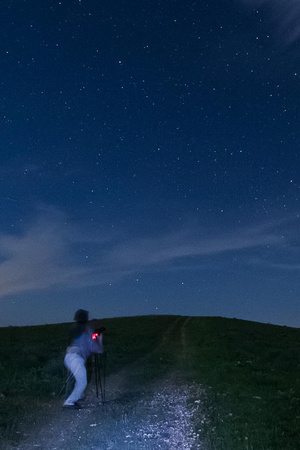 As the night wore on we tried several things all of which seemed to be OK.  Jim was chimping again next to me.  I asked, "How long can you hold that position?"

"Maybe 15 seconds if I grab the tripod."

"Try it. Oh, and can you turn down the brightness on the screen?"

I shot a 15 second exposure.  When it finally showed up on my screen, I was shocked.  Wow!  Not only was Jim easily visible but there above his head was the Big Dipper!  He heard me almost laugh out loud about the image, walked over, looked at my screen and said, "Shoot a bunch of those.  National Geographic loves stuff like that." 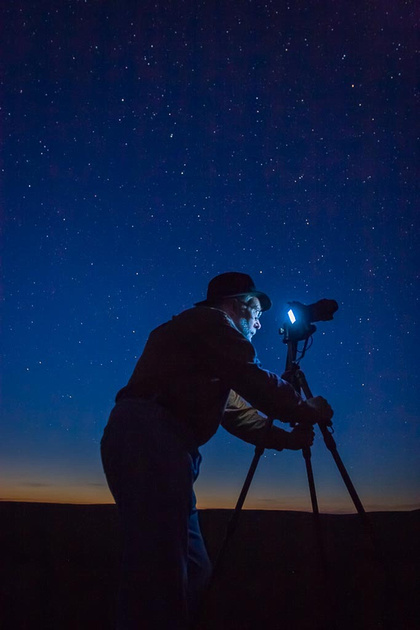 We shot the rest of the evening until the moon rose about midnight and obliterated most of the stars.  We had hoped to photograph the Perseid Meteor Shower that night but it was not to be.

With the moon up and bright we set up one more shot with the moon directly behind Jim.  I was now shooting with his 5D resting on my camera bag on the ground to get the angle we wanted.  The result was cool but I liked the "Big Dipper" shot better.  National Geographic liked the "Jim Richardson Eclipses the Moon" shot better and ended up using it online in their "In the Field" section about Jim's assignment in the Tall grass Prairie. 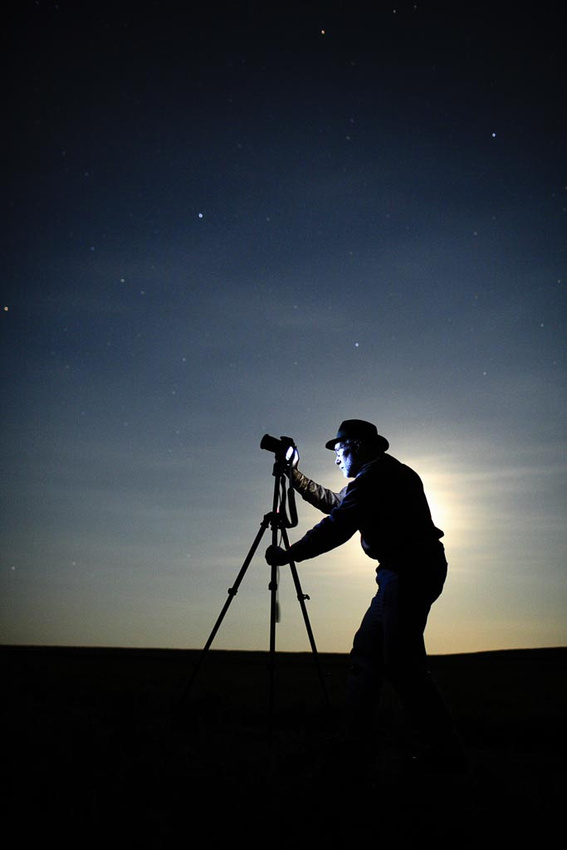 Here are some general guidelines for shooting the stars:

1.  The wider the lens you use the longer you can expose without noticeable star trails.  I like using my 28mm on the full frame 5DIII I am shooting with these days but I also have used a 16mm and a 20mm lens, both f/2.8

2.   BEFORE it gets really dark, focus on something far away, turn off your autofocus and tape you focus ring in place so you don't bump it and get fuzzy stars.  With some of the more modern digital camera you can use "Live View" in zoomed mode and manually focus on a star.  Have not tried that yet.  Probably works OK on bright stars.

3.   Set you camera to Long Exposure Noise Reduction.  What this does is take a second exposure of equal duration as your original exposure without opening the shutter, generating the same noise, then subtracts that from the first exposure.  A 30 second exposure that you take will require about a minute of camera down time.  Get over it.

4.   Use a rock SOLID tripod and a cable release!

5.   Remove your lens hood!  It is like a big sail sticking out there.  Here in Kansas, that is a bad thing!

6.   Use fresh batteries.  Digital cameras use power to lock open the shutter unlike the old mechanical Canon F-1 I grew up with.  Keep spare batteries handy; yours will die in a couple of hours.

7.   Try to learn the basic controls on your camera by touch.  Be able to make small adjustments without turning on a blinding light especially if other are shooting with you. 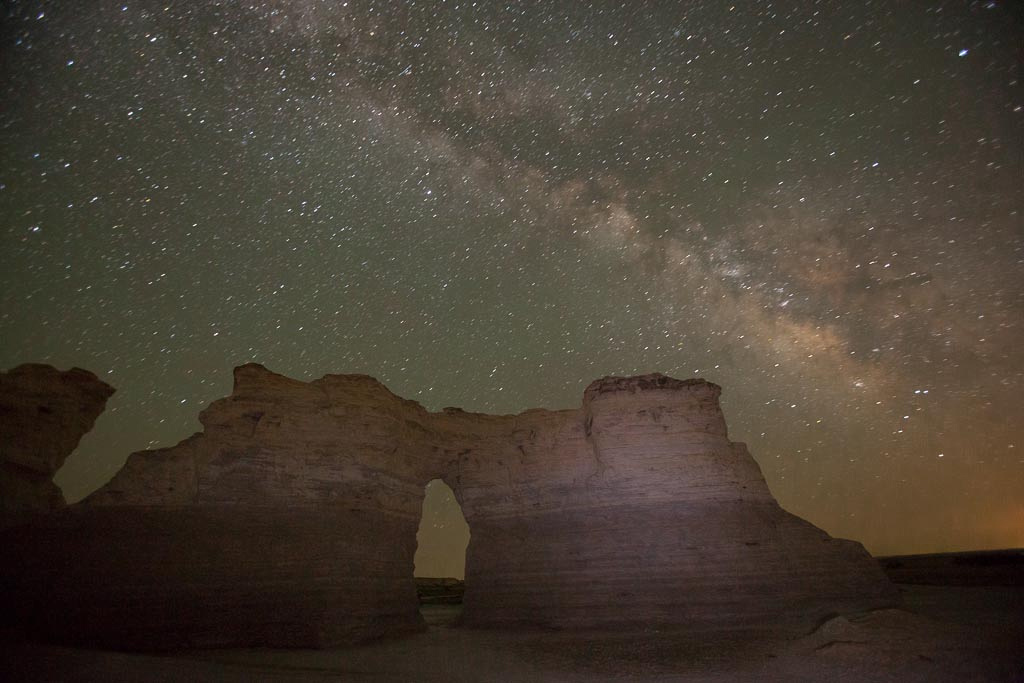 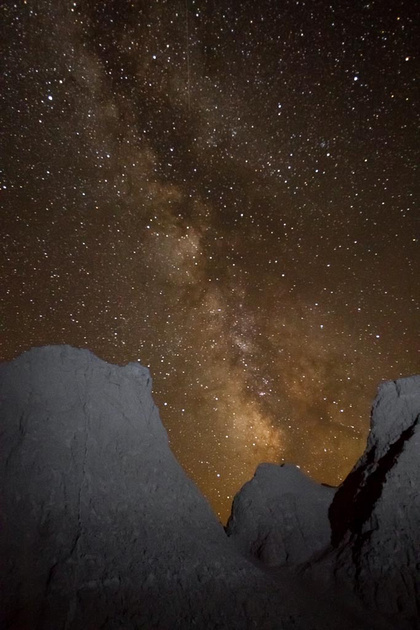 1.   Dark Skies are almost a must for this!  You don't know dark until you have been in Big Bend National Park or Natural Bridges.  Those places are special!

3.  No LIGHTS! If you are shooting with other people make sure they don't decide to turn on lights or use a flash.  People usually like to CHIMP their shots so have them turn down their screen brightness so as not to blind everyone else or ruin someones image.

4.   If there are foreground objects, try illuminating them with a VERY small LED flashlight.  It doesn't take much.  About the only guideline I can give here is EXPERIMENT but keep track of how long and how much you feather the light source.

5.   I shoot in RAW.  I highly recommend you shoot in RAW mode as well.  This will let you make adjustments to white balance.  I am not sure what white balance is correct for these night images.  I tend to like tungsten for the blue cast it gives the sky.