"We are going to be doing a roundup at the ranch, you know, branding cattle, and stuff like that.  You interested in doing some photos for us of the event?

"I would love to Danny but you have to promise me two things."

I want a real branding iron, none of this electric stuff and I want real camp coffee, made over an open fire with no filter, you know, grounds thrown into the hot water; swirl the pot around to settle the grounds..."

"OK, not a problem.  I already have the brand and the coffee is the best in the world made that way."

This was going to be fun, photographing a real round up and branding just as it has been done in the western plains for years.  My good friend Dan Nowlin owned a small ranch in the plains of Eastern Colorado, close enough to Denver to see the noxious brown cloud but far enough away to not get involved.  To the southwest towered Pike's Peak, far enough away to be only a minor backdrop for the days activities.  Dan's cousin from Wyoming was bringing in his horses and daughter to help.

When I got there, the fire was going, the branding iron was heating up, the coffee was boiling and the horses were ready.  I was shooting with two Canon F-1's and my two favorite lenses, a 100/2.0 and a 35/2.0 but there was a problem.  The motor drive bothered the daughter.  Every time I shot, she looked my way and lost track of what she was doing.  I had intended to include her in many of the images because; one, she handled the cutting horse like a champion and; two, because she was nothing short of beautiful and 20-something years old.  Maybe the reasons were reversed but it didn't matter.  I left one camera empty and turned it on.  I let the motor drive hammer away with no film in the camera until she finally learned to ignore it!  It worked.  I added film and shot away.  There is much more to a roundup than a beautiful young lady, horses, cattle and a branding iron.  There is also the squeeze chute, the inoculations, the ear tags and the smell of burning hair and flesh that pervades the air, as well as the "lot".  The lot is where the cattle are kept at night to keep the mountain lions from harvesting a few.  The branding took place in the lot requiring someone to sit on the ground, grab a calf's rear leg and pull on it while simultaneously pushing on the other rear leg with your cowboy boot. Someone needed to do this.  I didn't have cowboy boots and I was photographing the event, plus, well, just make up an excuse.  I had no intentions of sitting on the wet ground in a "cow lot".  So the young lady jumped right in, no second thoughts,  and got the seat of her jeans wet, dirty and smelling like a feed lot!  Now there is a real ranch hand!

I shot for several hours, using up 10 or 12 rolls of Ektachrome in the process.  The images turned out better than I imagined!  Danny was extremely happy, I was happy, the cousin was happy, the daughter was happy, my wife, uh, was somewhat perturbed that almost every image involved the young lady.  Actually, there was a good mix of everybody involved that day and I loved all the images. 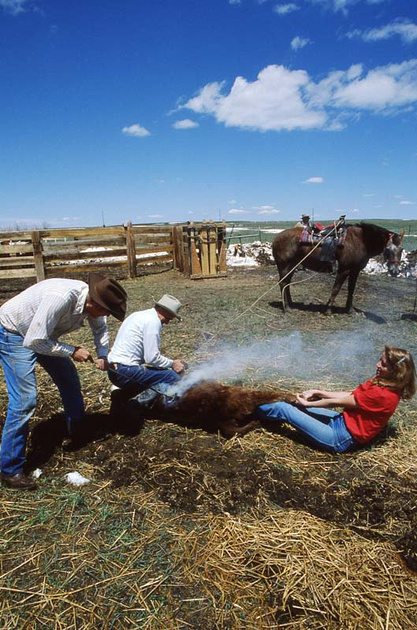