Just the name "Kentucky Falls" sounds like the back woods of the eastern US somewhere, right?  Kentucky?  Tennessee? Georgia?  Nope!  None of those places.  It is in Oregon.  I was headed to see a customer in Eugene, driving down from the airport in Portland.  Stopped at a rest area (too much coffee) and found a great booklet on Lane County, Oregon, one of the largest counties and only one of two counties that stretches from the coast to the Cascades.  Inside the booklet was a photograph of a spectacular waterfall, Kentucky Falls.  I read every stinking page in the booklet.  No where did it give the location for the falls.  I checked out the map on back.  Not on there either.  I asked the lady behind the counter.  She had no idea where it was.  We called the county information number on the back of the booklet.  No, they didn't know where it was either.  I was getting frustrated; "How can you have an image so vividly displayed in your booklet and not know the location in your own county????"  The lady on the other end of the phone took my cell phone number and name, said she would call me back.  I gave up and continued on my way to Eugene.  I was about 30 minutes away and two hours early for my appointment at 5pm.  Fifteen minutes down the road my phone rang. They had found someone who knew where it was!  I pulled off and grabbed my Delorme atlas of Oregon.  The person on the phone gave me directions which I followed on the map to the location, about 15 miles west of Eugene!  I had time!  I was going!  I reprogrammed myself to loop around Eugene and head west.  I found the turn off and headed up some logging roads.  I have found that these crazy side trips I make require either a four wheel drive vehicle or a rental car.  With a fine Avis provided Ford LTD planted beneath me, I was in business. The roads were not that bad, sometimes rutted and bumpy but I would almost take my own car here!  After about 40 minutes of jouncing and bottoming out the suspension I found a pull off parking area with a sign pointing to Kentucky Falls about 1/2 mile down a trail!  YES!  I grabbed my camera (this was a business trip but all business trips require camera gear in case I get bored) and tripod and jogged down the trail.  The light was fading and my appointment was somewhere back down that crazy "road" and into town.  Barely made it to the falls and set up the tripod.  I made maybe a dozen exposures, all with relatively slow shutter speeds to smooth the water.  The place was as beautiful as the booklet displayed.  With time gone, I raced back to the car and headed back along the logging roads knowing I would be late to my appointment but hey! this is ART!  Nothing should stand in the way of ART!  Driving in my best moonshiners mode along those narrow, twisting, rough roads in a Ford LTD, what could be more fun?  I was laughing and sliding around corners and all grins until I met a logging truck coming head on at, well, full moonshiner speed!  I swerved to the shoulder (what shoulder?) and watched him blast beside me, shaking the ground and the LTD like a California Earthquake!  Damn!  That was close.

I pulled into the micro-brewery in Eugene, barely 15 minutes late.  The customers were there already waiting on me.  They asked if I had traffic problems or got lost.  I had to explain that I took a detour to Kentucky Falls.

"Where the hell is that?"

"A few miles west of Eugene."

Not believing me, I walked out to the car, brought in my digital camera and the Delorme atlas.  I showed them the photos on the LCD screen and then proceeded to show them the falls on the map; just west of Eugene.  They all looked at each other and said, "So you have been to places in our own county that we have never heard of?"

"That's about the size of it; give me a "Steelhead IPA." 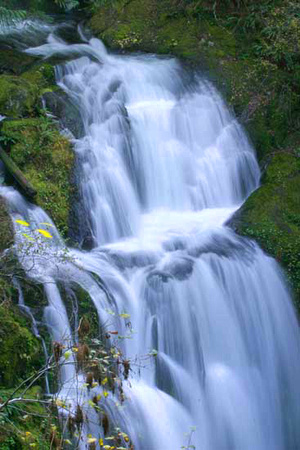