About the Camera and Process

The camera was actually a reproduction of an 1870 Anthony tintype camera, single plate version.  I need to explain the "single plate" thing.  A tintype is an original, there is no negative to make more prints.  What comes out of the camera is a one of a kind.  You get it, you keep it.  The photographer only gets your money one time.  If you want multiple images, you have to have another photograph taken.  Some of the cameras were built with four lenses allowing four images to be taken at one time.  The plate was then cut into four pieces yielding four identical images.  If you have ever worked in a darkroom or loaded slides in a tray, you know you can get them in backwards.  No big deal, just turn them around.  Negatives and film can be viewed from either side BUT a tintype is solid so it can only be viewed from one side.  Optics turn the image upside down and reverse it right to left.  You can turn the tintype right side up but not "OVER"!  Most tintypes are reversed, left to right.  To overcome this some of the cameras had mirrors mounted in front at a 45 degree angle thus reversing the image and correcting this flaw.   We did not have a mirror, uh-oh!  We had a special sign made up to say, "State Fair of Texas 1976" in nice old lettering.  First time we used it in a pose, it was BACKWARDS!  My artist and set designer friend worked a block from the fair grounds so I ran over there and explained the problem. He immediately made a new sign in reverse!  I watched him do it and I still don't know how someone can do that, but it fixed our problem. 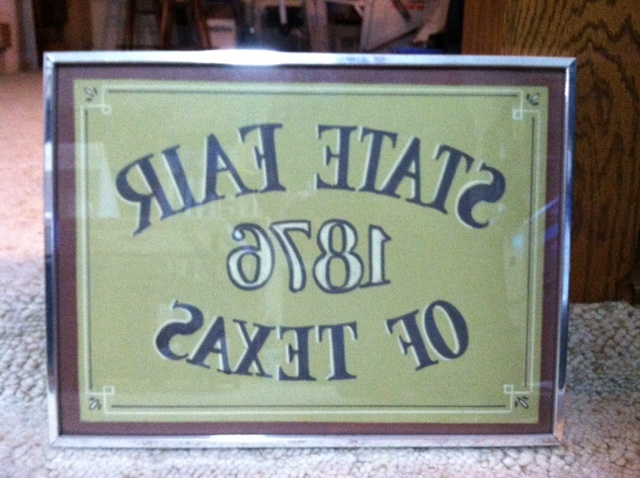 For some reason I kept that backward sign and still have it!

Internally the camera was equipped with a Packard Shutter.  Basically a small cylinder is opened with compressed air which YOU supply via a rubber bulb and closed with a vacuum which you also supply via the rubber bulb.  Place your thumb over the hole on the end of the bulb and squeeze the bulb, you have pressure to open the shutter.  Squeeze the bulb and THEN place your thumb over the hole and un-squeeze the bulb and you generate a vacuum, closing the shutter.  With exposures of a minimum of 8 seconds at f/5.6 it is no big deal to count the seconds off in your head then close the shutter to control exposure.  For the subject?  A different dilemma, holding perfectly still for 8 or more seconds was a challenge!  Most studios had head braces, here is a sample images of twins, one using the brace (seen on the floor behind him on the right) while the brother tries to hold still.  We did not have a head brace!  One family group we did had a small child who constantly moved his head around during the exposure!  He looked like the "headless kid" in the final image.

The darkroom was a small standup corner of the booth with a canvas curtain I would step behind and close behind me.  It was easy to tell I was in there!  No room to move forward, the canvas had a huge lump where I was standing.  We went thru a normal print developing solution, Dektol if I recall correctly, then stop bath and fix and finally a wash and finished with a dunk in a tank of alcohol to displace the water and get things dried rapidly.  The bad news is we had to walk about half the length of the building we were in to get fresh water and to dump the old alcohol and other chemistry.  It all went down the drain the bathroom.

Next:  Visitors to the booth and the competition!