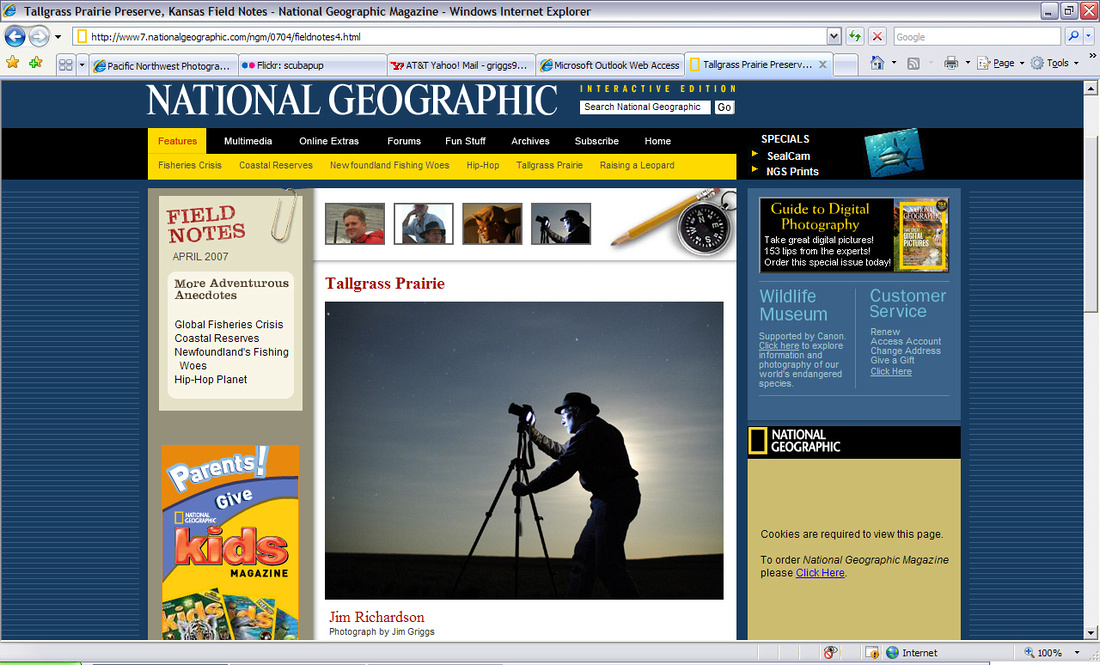 Ever want to go out shooting with a National Geographic photographer? Wonder what they do differently to get those spectacular images? I had the opportunity and seized the moment. It all started with a simple phone call;

“Hello.”
“Jim? This is Jim Richardson from National Geographic.”
“Uh, yes?”
“I need to ask a question and feel free to say no. It will not offend me.”
“OK, go ahead.”
“I know you have spent a lot of time in the Flint Hills in Kansas and have even taught a few photo workshops there.”
“Yes.”
“I have an assignment to photograph the tall grass prairie in the Flint Hills for a future issue and I was wondering if you would be willing to share some of your secret locations with me?”
“Sure, love to. When?”
“How about I pick you up Saturday morning? Are you a morning person?”
“Yes, no problem. Are we going to shoot?”
“I would hope so. I will bring my gear, why don’t you as well. OK if I pick you up early, say… …7?”
“Works for me, earlier if you want.”
“Really? How does 6 sound?”
“I will be ready.”

For the next eight months I spent several weekends out shooting with Richardson. That first weekend was a revelation for me. Even though it was overcast and raining we shot in several locations, scouted places to shoot later and at what time of day, marked spots on the topographic maps and drove over 400 miles.

Let me shed a little light on a popular misunderstanding about shooting on assignment for anybody much less National Geographic. No one is going to pay you time and expenses to go out and discover someplace. National Geographic photographers are probably the best researchers in the world! Every assignment has got to be the equivalent of a Master’s Thesis. They do not get on a plane with a bunch of gear, show up and wander around hoping that serendipity happens in front of their lenses. By the time Jim picked me up he had spent several months researching the area to know what happens where when. He had already made contacts at the Tallgrass Prairie Preserve near Strong City (one of our stops to get a key to the back country gate), had contacted a flint hills rancher who was giving us access to their property, introduced us to other ranchers and arranged a prairie burn for us to photograph. Jim had also acquired numerous other photos of the area in the way of books and magazine articles. His reason for taking me along was mainly to pick my brain about areas I had been on my numerous trips to and through the area. I did my best to also help him with strobes, flash lights and other paraphernalia while he was shooting.

On the last leg of our trip on the first day we found a field of false indigo, beautiful flowers that grow in strands in the short grass areas. We spent about three hours photographing these clumps of flowers. For the first two hours we worked independently. My normal modes of shooting these types of things takes me maybe 30 minutes to an hour to get what I think are good images. It was very late in the day and the sun was setting. I spent the later part of the second hour holding strobes for Jim and packing away my gear. Jim kept shooting. I got my gear back out and shot a few more minutes then gave up, light fading fast. Jim kept shooting. Surely he will pack it in and quit in the not too distant future I thought. He dug down in his bag and produced a small LED flashlight and proceeded to tape a colored gel over it. According to Jim the gel corrects the LED to daylight. Cool. We, or rather he continued to shoot for almost another hour as the sun sank behind the horizon and left us with only the glow of reflected light from overhead clouds and the ambient light from the almost clear sky. Jim was on the ground, eye pressed to the right angle finder on this camera, camera braced on top of one of my bags shooting with a super wide angle lens slightly upward. At first I held a diffused strobe to help fill in the strand of flowers but as the ambient light fell I started “painting” in the flowers with the color corrected flashlight during his 10 to 20 second exposures. We experimented with how much light I should add using my fingers to trim the light level down so as not to blow out the flowers during his long exposures. The best exposures were when I illuminated the flowers at an oblique angle with one finger acting as a cover for two thirds of the light beam. It wasn’t until Jim was through that I saw the “finished” image. I was shocked! There on the LCD screen of his camera was the curve of the strand of flowers softly lit by the flashlight mimicked in the sky by the same graceful curve formed by a cloud, glowing pale red and orange in the blue to purple sky. I was dumbstruck. This was but one example of the dedication to detail Jim was to display each and every time we were out shooting together.

One key thing he kept stressing was the need to not only take beautiful photos but photos that depicted the subjects in ways not done before. He said, "It is not enough to take beautiful images anymore. You have to show them in a new way, a new angle, a new surrounding, something that will stop people in their tracks." One was was to change vantage points, shoot from low or high camera angles. I was in the habit of setting my tripod up to steady the camera and hold it still at eye-level. No more. That is the most over used vantage level. Now I drop down extremely low or look for ways to get up high, either in the bed of my truck, on a ladder or, if available, from the air. I rarely shoot in the middle of the day anymore. That time is best left to siestas or exploring and looking for vantage points, maybe even lunch. If I am stuck shooting mid-day I look for ways to change the angle, viewpoint and add fill flash or lighting that minimizes the deep shadows from the high sun.

On one particular outing we spent and entire evening shooting lightning bugs, starting at sundown, about 9 pm until well after midnight. Several nights later we shot the Milky Way and eventually I got my all-time favorite image from the weekends out shooting together, a shot of Jim with Ursa Major just above his head, his face illuminated by the LCD on the back of his camera. He took one look at the first image and said, "Take lots of those, National Geographic will love them." Eventually one of the images I took in a similar setting ended up on the National Geographic web page illustrating the assignment that Jim was shooting.

Since then, Jim and I have become good friends.  He even arranged for me to help edit a story that was published in Geographic Traveler magazine and a tour of the facilities in Washington, D. C., but that is a different story! 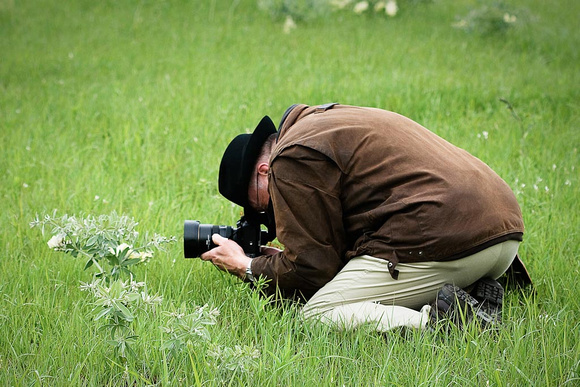 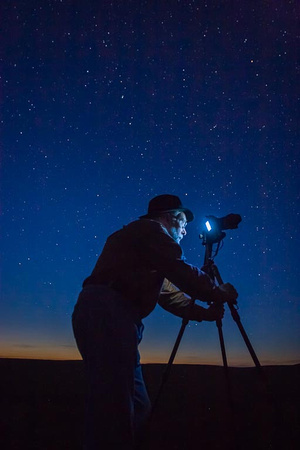 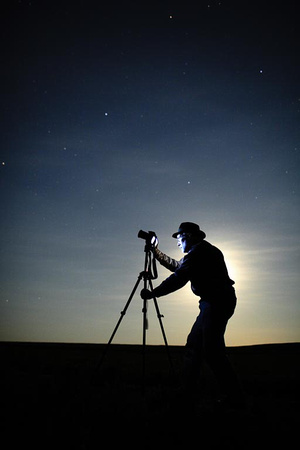